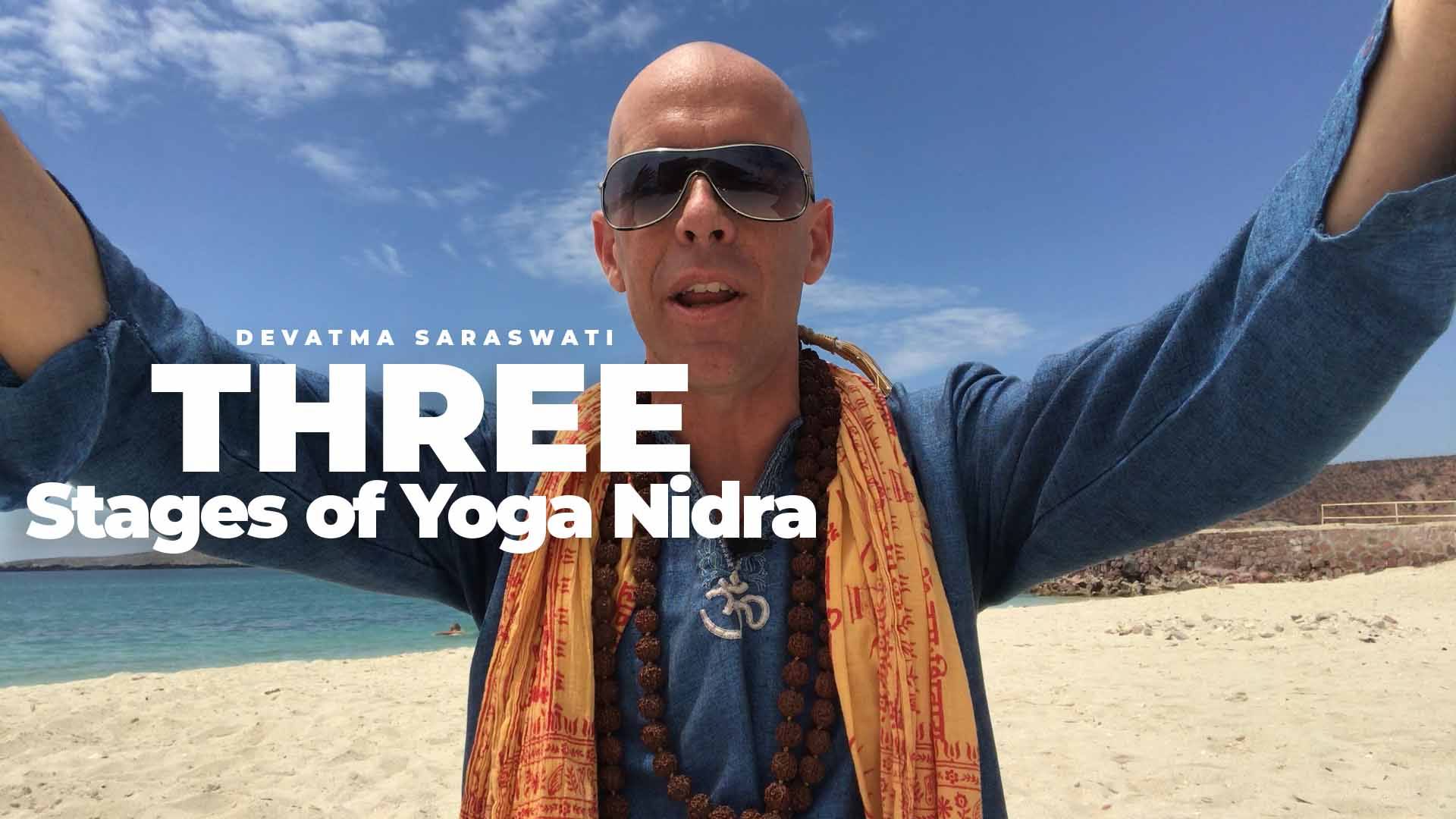 Yoga nidra provides therapeutic relief from all the various sources of suffering without limit, depending on how deep into the three stages of yoga nidra you can go. Although total relief from even our deepest existential suffering can be experienced during the course of any yoga nidra session, for most of us there is a process we must go through: First we develop physical relaxation, then we learn to relax the subtle levels of our mind and emotions, before ultimately experiencing total relief on the causal dimension of pure bliss beyond the mind.

Sleep, or nidra, is the first level of yoga nidra for most people. This is because we are only used to being awake when we are in the first of the three states of mind. First we must learn to put the physical dimension of the being to sleep before we can enter into the subtle dimension.

Most people enter into sleep in the beginning stages of yoga nidra because they have not yet released any pent-up nervous tension nor cultivated enough awareness to remain awake. During the initial phases of learning yoga nidra a person is just beginning to release the deep-seated muscular tensions that they hold subconsciously in relation to chronic psychological tension. As this surface level tension is first released it then comes to the surface and may be experienced as anxiety or the meditator may simply fall asleep.

Sleep has multiple functions, not only do we need it for regeneration and reenergizing our personal quantum of cosmic energy, but it acts as a defense mechanism when too much energy/consciousness is being experienced. The release of energy from the years of pent-up nervous tension has this affect and the best way the meditator can allow this energy to leave their nervous system without it overwhelming them is to simply fall asleep.

It takes a tremendous amount of prana to suppress nervous tension, so once that tension has been released there is now a greater abundance of free prana to aid in the process of fueling higher awareness. Now you can descend into the deeper levels of the mind while remaining wakeful.

Now that you are able to put the physical body to sleep while remaining awake you immediately enter into the subtle realm of the mind, emotions and the components of the psyche. Here the inner experience becomes vivid. You may see visions, feelings, and experience physical sensations such as heat or cold, pleasure or pain. These are all the samksaras (impressions stored in the pscyhe) coming to the surface of conscious awareness to be released and transcended. During this phase you may have many unexplainable experiences as these impressions, memories, suppressed feelings, etc. begin to manifest. It is not important that you intellectually understand them. In fact, it is advised to resist the urge to over analyze, judge, or attempt to derive any kind of ‘personal meaning’ from the experiences you have at this stage. All that must be done is to remain a detached witness to all inner and outer phenomenon, to witness it from a third party perspective as if watching a performance. Learn to see all these thoughts, memories, feelings and sensations as impermanent, subject to change and therefore not-self.

To facilitate the process of psychological purification happening during conscious dreaming we utilize visualizations during yoga nidra. The format of a story, visualization sequence or symbolism allows for the process of abstract association to occur, where each image described provokes a reaction from the inner recesses of the mind and instead of merely seeing the object named you spontaneously relive a memory, and are able to release that trapped memory by allowing it to fully manifest with detached awareness.

In this way, gradually the mind is purified and you will have fewer and fewer abstract associations during the visualization stage, and more direct associations where if an object is named you see only the object and nothing else, it does not stir up associated reactions from the mind, you remain one-pointed and even minded. Now you are able to enjoy the no-mind state of yoga nidra; sleepless sleep.

Now that you have successfully put both the body and mind into a state of nidra, only pure conscious awareness remains. You experience the bliss of the unconscious state while awake. This is the same bliss you feel during deep sleep every night, anandam. To experience that same bliss while conscious provides not only a total form of relief from all various forms of suffering, but it allows for you to experience ego-death, which liberates you from the source of all suffering: Ignorance of Self and the resulting egocentricity that comes with it.

This is where the greatest therapeutic relief occurs even if we only have small glimpses of that perfect inner silence and stillness. It doesn’t matter what specific forms of illness, stress or tension we are experiencing; when we experience the sleepless sleep state during yoga nidra there is total relief on all dimensions of our being.

The third state of yoga nidra leads us to the transcendental experience of that fourth state, the turiya, which is that pure awareness of Self that is experiencing all the three states. The final state, unconsciousness, is the blank canvas that allows us to then become aware to that source of awareness that is the inner seer, the knower, the drashta. Now you experience your true Self through the medium of that state of featureless consciousness.

So it does not matter what is the source of your suffering, everyone receives total relief when they transcend the body and mind during yoga nidra. Although this is a complete method of meditation and capable of allowing you to experiencing the Absolute, it is also a beginner’s meditation technique that anyone can do even if they have never attempted to meditate before.

What most of us really need the most is just the chance to truly relax without just bombarding our senses with more stimuli. yoga nidra provides that opportunity to become still and silent long enough to release all surface level nervous tension, and begin the process of unwinding and returning to the perfect joy of your natural inner state of being.

With my ascendant lord in the ninth house you can see that I have always been inclined towards spiritual interests. My first major spiritual awakening occurred at seventeen in which I had visions of past lives as a yogi and saw the ultimate mission and purpose of my soul (my sankalpa) during this life. About seven years later I met my guruji and my Kundalini Shakti was awakened through shaktipat diksha when I was twenty-four. The intense inner awakening that followed led me on many extended journeys through India and South East Asia studying with several great masters, whom trained me in the esoteric teachings of Yoga, Tantra, and Vedanta. With Jupiter in my tenth house (while bringing the strength of five planets from Sagittarius) I have always had a propensity towards teaching. To share these invaluable ancient traditional techniques with you is a tremendous blessing and honor. Hari Om, ~Devatma Saraswati
Previous

Mental, Emotional and Psychological Healing and Restoration With Yoga Nidra